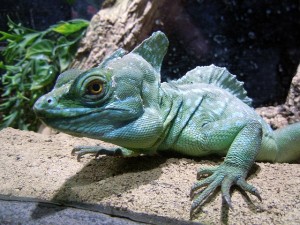 Lizards are found in the fossil record alongside popular dinosaurs. Today we recognize over 3,000 species of lizards that belong to the order Squamata, or scaled reptiles. Many living lizards look like miniature dinosaurs and exhibit the same curious appendages (like the plumed basilisk lizard to the right). Very large lizard fossils that have been discovered in Triassic strata. For example, the extinct swimming lizard Mososaur was 50 feet long and likely weighed about three tons! Obviously extant lizards are much smaller than that fossilized giant. Genesis Park features various living lizards below, some with fascinating characteristics that might surprise you.