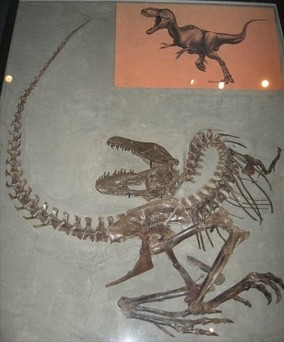 As a rule, vertebrate fossils are not discovered as neatly connected skeletons that were tranquilly buried. This is certainly true for the dinosaurs, most of whose bones are found disarticulated (not connected in such a way as to demonstrate normal relationships), dispersed over a broad area, or only preserved in small part. 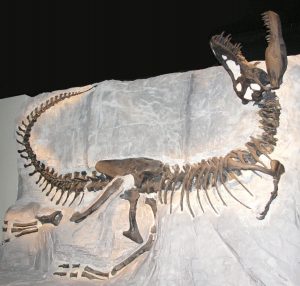 When a complete skeleton is found intact, it provides much more information to the paleontologist than a loose pile of bones. One of the striking characteristics of many of these connected skeletons is that they exhibit a peculiar contorted position popularly called the “death pose.” This pose of many fossilized dinosaurs, with wide-open mouth, head thrown back and recurved tail, likely resulted from the agonized death throes typical of brain damage from asphyxiation, according to paleontologists. “An extreme, dorsally hyperextended posture of the spine (opisthotonus), characterized by the skull and neck recurved over the back, and with strong extension of the tail, is observed in many well-preserved, articulated amniote skeletons (birds and other dinosaurs, pterosaurs, and at least placental mammals). Postmortem water transport may explain some cases of spinal curvature in fossil tetrapods, but we show how these can be distinguished from causes of the opisthotonic posture, which is a biotic syndrome.” (Faux, Cynthia Marshall, Padian, Kevin, “The Opisthotonic Posture of Vertebrate Skeletons: Postmortem Contraction or Death Throes?,” Paleobiology, Spring 2007.) 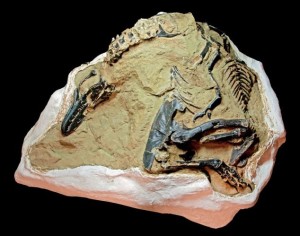 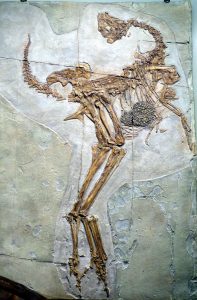 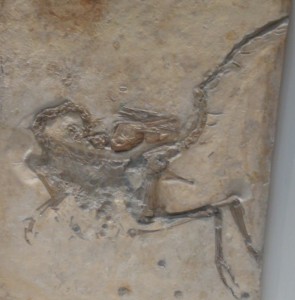 Others emphasize how a watery grave worked with the dinosaur physiology to create this unique posture: “A strong ligamentum elasticum was essential for all long necked dinosaurs with a long tail.  The preloaded ligament helped them [by] saving energy in their terrestrial mode of life.  Following their death, at which they were immersed in water, the stored energy along the vertebra was strong enough to arch back the spine, increasingly so as more and more muscles and other soft parts were decaying.  It is a special highlight that in the Compsognathus specimen, these gradual steps of recurvature can be substantiated, too. Therefore, biomechanics is ruling the postmortem weird posture of a carcass in a watery grave, not death throes.” (Reisdorf and Wutteke; cited in “Why Do Dinosaur Skeletons Look So Weird?,” ScienceDaily.com, Feb. 16, 2012.) 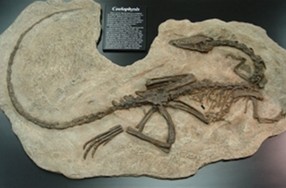 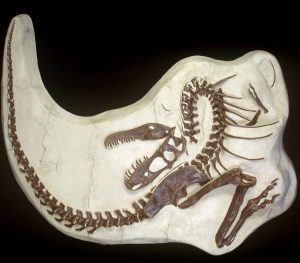 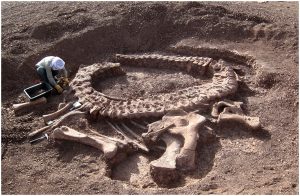 Above are more pictures of popular dinosaurs exhibiting the typical death pose. To the right is an image of a Spinophorosaurus so contorted as to almost form a circle! Creationist Ian Juby has collected a large sample of such cases (including some of the pictures on this page) and presents this as evidence of fossilized creatures meeting their demise during the Genesis Flood. “I probably have close to a hundred examples now of the death pose, both in land animals and marine organisms. Obviously the marine organisms didn’t lay out in the desert and shrivel up…In fact, this is a sign lifeguards look for, to spot if someone is drowning–even people, when they are drowning, pull their heads back.” (Private correspondence, used with permission, 2009.) 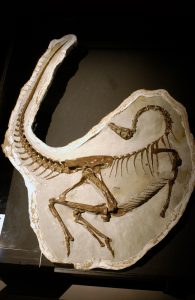 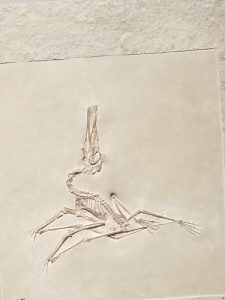 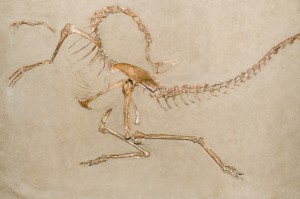 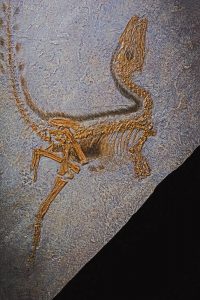 The evidence of a drowning causing the dinosaur’s demise continues to mount up from all over the world. “When palaeontologists are lucky enough to find a complete dinosaur skeleton—whether it be a tiny Sinosauropteryx [right] or an enormous Apatosaurus—there’s a good chance it will be found with its head thrown backwards and its tail arched upwards.” (Switek, B., “Watery Secret of the Dinosaur Death Pose,” New Scientist, November 23, 2011.) The worldwide Genesis Flood provides a straightforward explanation for all these dinosaur fossils and ties in well with the fact that dinosaur bones are very often mixed with marine sediments. For example, sharks have been found alongside the dinosaurs in Montana’s famous Hell Creek fossil beds and the popular Spinosaurus has been found in the same Moroccan rock layers as sharks, sawfish, ray-finned fishes, and coelacanths. (Ibrahim, Nizar, et. al., “Semiaquatic Adaptions in a Giant Predatory Dinosaur,” Science 345, 2014, pp. 1613-1616.) 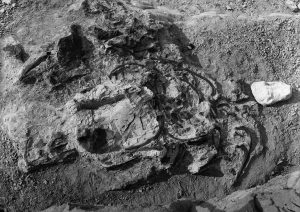 A similar phenomenon to what we have discussed above involves the question of why the massive, armored Ankylosaurus dinosaurs are almost always found fossilized lying on their backs? For example, 26 out of 37 fossil ankylosaurs discovered in Alberta, Canada, were found upside down. Paleontologists have puzzled over this belly-up death pose since the 1930s. Now a new theory presented in 2017 at the Society of Vertebrate Paleontology meeting in Calgary, Alberta suggests this happened because of a flood mechanism. “We used computer modeling to show that ankylosaurs likely flipped over due to a phenomenon called ‘bloat-and-float,’ where the gases that accumulate in the bloating belly of the carcass cause the animal to flip over while suspended in water,” states researcher Jordan Mallon, a paleobiologist at the Canadian Museum of Nature in Ontario, Canada in an interview with Live Science. The computer model showed that when an ankylosaur’s center of gravity (a downward force) didn’t match its center of buoyancy (an upward force), a disturbance such as a breeze, current or wave could cause the rotund, bloated animal to turn upside down. After some time it would sink that way and get buried and fossilized. 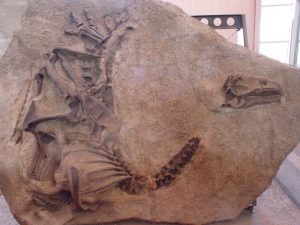 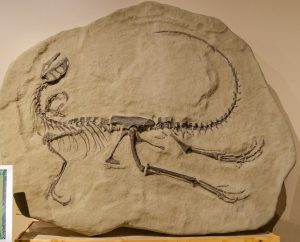 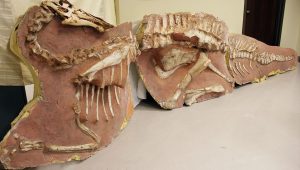 There is a general agreement that most of the fossilized dinosaurs perished in a watery, muddy flow. “Recreating the spectacular pose many dinosaurs adopted in death might involve following the simplest of instructions: just add water.” (Switek, Brian, “Is water the secret of the dinosaur death pose?,” New Scientist, Nov. 23, 2011.) This scenario really is essential to rapidly bury them and preserve their remains from bacterial decomposition. Those who don’t believe in the Genesis Flood will postulate local catastrophes like mudslides, swollen rivers, or flash floods. But if these are the mechanisms that formed the vast dinosaur graveyards, how come today’s rivers and local floods don’t ever form huge deposits of fossils like what we see in the dinosaur fossil beds? The Dino Death Pose is powerful evidence of a massive Flood that swept up these dinosaurs, carried them and rapidly buried them in the rock layers along with marine organisms.