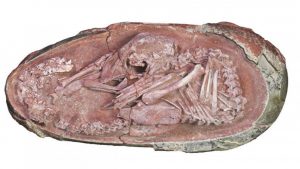 Paleontologists use the term “trace fossils” for preserved remains of biological activity that were not originally part of the organism’s body (also known as an ichnofossil). These include things like nests, footprints, burrows, gastroliths (stones swallowed to help with digestion), and coprolite (fossilized dung). Fragile remains like tracks and nests require quick burial to survive. Yet we have a surprising amount of these trace fossils that help inform us regarding dinosaur activities. In Patagonia, Argentina there are thousands of fossilized sauropod eggs. In the Pyrenees mountains of Spain & France is a site containing about 300,000 dinosaur eggs. The deserts of Kyrgyzstan, Mongolia and China have the world’s largest deposit of dinosaur eggs. Some of these were so well preserved by rapid burial that fine details of the embryo can be seen. 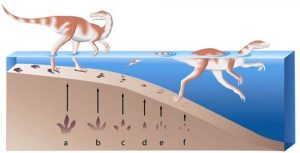 Dinosaur tracks from diverse parts of the world (including China, USA, and Spain) show the dinosaurs initially making clear tracks. Then the tracks become shallower as the dinosaur becomes buoyant. Finally, there are just scratch marks recorded in the rock layer. This is consistent with dinosaurs walking, going on tiptoes, and finally swimming. In Queensland, Australia there is a famous dinosaur trackway called Lark Quarry Dinosaur Trackway. There are thousands of footprints covering an area about the size of a basketball court. This “dinosaur stampede” ground shows all the tracks going in the same direction, as if they were fleeing from something. Many of these footprints have elongated grooves, showing that the dinosaurs were scratching along the bottom on their tippy toes. This would make sense if they were being carried up by rising flood waters. Analysts have examined the stride and determined that the left, right, left right tracks were too distant for the dinosaur to have been walking on land. More likely, they were being carried along by Flood currents. 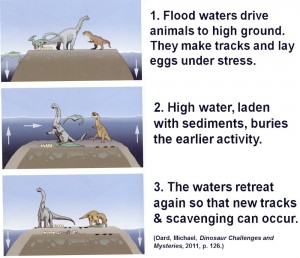 Explaining the dinosaur nesting sites and trackways has been a challenge to creationists and evolutionists alike. For creationists, the question has been how can there be activity on top of layers of strata supposedly laid down by the flood? Were dinosaurs walking around and laying eggs in the middle of the Noachian catastrophe? For evolutionists, there are multiple difficult issues to explain. During the past 20 years, dinosaur track ways have been discovered at over 1,500 locations from around the world, with the total number of tracks in the billions. But how were all these tracks preserved? Today’s animal tracks in mud are not fossilized. Instead, erosive processes rapidly erase them. In addition, the tracks are not meandering as usually would be expected. They are typically all moving in a straight line like a highway. And there are almost no juvenile tracks (as if only the mature healthy animals were still surviving and able to flee ahead of the catastrophe that fossilized the tracks). There is a puzzling absence of tracks from stegosaurs, ankylosaurs and ceratopsians.  These heavy, armored reptiles would be poor swimmers and slow to flee. Hence, it would not be expected that they would have survived the initial waves that laid down those sedimentary layers that recorded these footprint trace fossils. Fossilized trackways are made by dinosaurs with a body plan built for swimming.

In his 2011 book Dinosaur Challenges and Mysteries Michael Oard puts forward a model of Briefly Exposed Diluvial Sediments (BEDS) to explain the data. His hypothesis postulates that alternatively rising and lowering flood waters, coupled with rapid sedimentation during the Genesis Flood best explains the features. It is quite reasonable that tectonic activity, meteorite impacts, and tidal forces would create oscillating water levels.  Dinosaur eggs, nests, embryos, and occasionally hatchlings, are now recognized from about 200 locations around the world. But there is typically no vegetation preserved around the egg clutches. Eggs (the great majority being unhatched) appear to be laid directly on flat bedding planes (like miles of empty of beach or mud flat or other soft sediment layer), not proper nests. “Despite the relative abundance of dinosaur eggs in the fossil record, trace-fossil evidence of dinosaur nest construction is extremely rare. The existence of nests is typically inferred by the presence of an egg clutch and usually it is not accompanied by physical evidence of nest architecture” (Chiappe, L.M., et al., “Nest Structures for Sauropods: Sedimentary Criteria for Recognition of Dinosaur Nesting Traces,” Palaios 19, 2004, p. 89.). This is uncommon behavior for reptiles, who typically bury their porous eggs in the ground or under vegetation to maintain humidity and hide them. Some of the dinosaur egg shells are also multi-layered, giving evidence of being laid under stressful conditions. 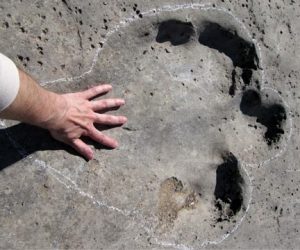 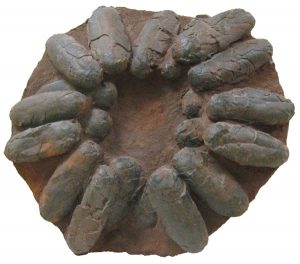 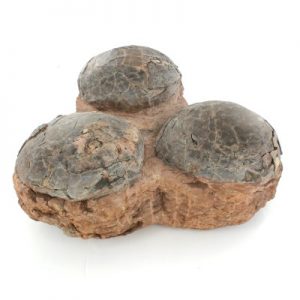 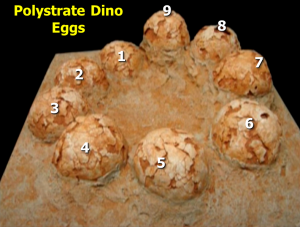 One additional item is of note with regard to dinosaur eggs. Some of these nests are polystrate fossils, that is they go through multiple rock layers. These layers might be interpreted as millions of years apart. But the eggs would never have been able to survive for eons while the next rock layer was slowly deposited. No, the layers must have been forming rapidly. In some cases the layers were forming while the mother dinosaur was laying her eggs. Notice the fossil nest to the left. This nest, found in Mongolia, shows how the dinosaur swiveled around and laid her eggs one after the other even as the muddy waters swirled around her. Egg number one is buried deep in the mud while number 9 is atop the sediment layer! By the time she finished laying, inches of additional mud had built up. Or perhaps exposed sediment had  dewatered so the egg no longer sank into it. These fossilized dinosaur eggs are further evidence of catastrophic global conditions. They are exciting support for the BEDS hypothesis and the Genesis Flood.