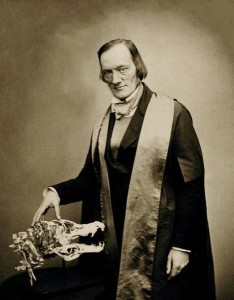 The name dinosaur is Greek for “terrible lizard.” The term was coined by the British anatomist Richard Owen, who used it in a speech to the British Association for the Advancement of Science in 1841. He first used it in print the following year in 1842. Interestingly, Owen’s expressed purpose for creating the new taxonomical order Dinosauria was to debunk certain evolutionary theories. Since these monstrous creatures had gone extinct long ago, Owen argued, the gradual progression from primitive to advanced species must be false. “Dinosaur” is the name informally given to a group of reptiles, widely thought to have become extinct, that were once dominant on the earth. Unlike most reptiles, dinosaurs walked with their legs directly below their hips. This is different from most modern lizards or crocodiles where the top section of the limb is splayed out horizontally from the body and the lower section goes from the “knee” joint straight down to the ground. However a few dinosaur species, like Triceratops, exhibit somewhat of a leg “sprawl.”

While dinosaurs were dominant on the earth, other reptiles were prominent in the skies and seas. Great Flying Reptiles include Quetzalcoatlus with a huge 14.4 m (48 ft) wingspread, the long-tailed, hairy Sordes and the famous Pterodactyl. Great Swimming Reptiles were also prevalent on the early earth like the giant marine lizard Mososaurus, the smaller, dolphin-like Icthyosaur and the ferocious Kronosaur. These two groups are often considered with the dinosaurs though they

are classified differently. In the vernacular, all three types of great reptiles can loosely be called “dinosaurians” and that is the way they are presented at Genesis Park.

Other reptiles are thought by evolutionists to have predated dinosaurs, like the sail lizard Dimetrodon, whose bony crest resembled the dinosaur Spinosaurus and the pig-like Lystrosaurus. Creationists believe that all these reptiles co-existed and that early earth conditions contributed to varieties of these terrible lizards growing so big. Although modern lizards are anatomically different from the dinosaurs, many exhibit similar external features and curious appendages.