Last week I was on the island of Madagascar doing night research concerning a nocturnal flying creature that the Malagasy island people call “Fangalabolo”. The local eye witnesses liken it to a very large bat with a wingspan over 5 feet. There is some disagreement in the zoological information regarding the largest bat in Madgascar. Some listings claim the Madagascar Flying Fox (Pteropus rufus) can have a wingspan up to 3 feet, while others claim it can go over 4 feet. Some researchers have even speculated that the “Fangalabolo” might actually be a living pterosaur, something like the African Kongamato. But it certainly is not unreasonable to have a fruit bat with a 5 ft wingspan. The largest bat of this type is the Philippine golden-crowned flying fox with a wingspan approaching 6 feet. An investigative film crew with The Travel Channel’s show Destination Truth had explored Ankarana Reserve (in the north) for the “Fangalabolo”. But we had reason to believe a breakthrough might come further south, in Isalo National Park (see map). The report down below details our results.

As we traveled south from the capitol of Antananarivo to our target area of Isalo National Park, we queried people working in the nature reserves who were knowledgeable about local wildlife. The local Malagasy name “Fangalabolo” was not that well recognized.  One person who had been a bush guide for over 10 years was familiar with the massive bat from a region 160 km north of our target area. He said that the French name for it was “Save Souris Parapluis”. We used night vision equipment and thermal imaging technology over multiple nights to search the rocky landscape for signs of the massive bat form. 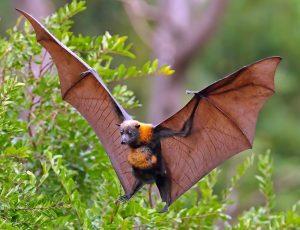 The initial encounter took place on October 20, about 8:45 pm by team members Todd & Kathy Beaman. They heard the sound of massive wings flying through a pass in the mountains. Not long after, both my wife Gloria and I saw the creature. We too heard the sound of huge wings and observed the creature for several seconds. The anatomical details are difficult to confirm with such a brief flyover, but we feel pretty confident in the “very large bat identification.” It certainly had over a 4 ft wingspan and might have approached 5 ft, much larger than the Madagascar owl. It was clearly seen to flutter like a bat in the night vision. At no point over multiple nights did we see anything glowing, which would be indicative of known pterosaur activity.