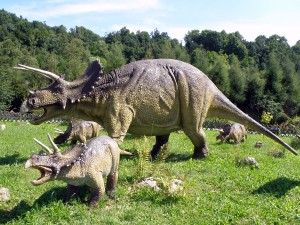 The ceratopsians, or “frilled dinosaurs,” are members of a family of large, plant-eating dinosaurs that vary in size from the tiny Protoceratops to the famous Triceratops. They have a parrot-like beak at the front of the jaw and sport a wide diversity of horns and frills, from the Chasmosaurus (depicted right) whose neck frill extended halfway down its back to the horn-less Pachyrhinosaurus. Paleontologists believe that their horns were utilized in combat while the neck frill appeared intimidating, perhaps protecting them from the large bipedal carnivores. The ceratopsians weighed several tons, as much as modern elephants, but their short feet and hind-leg sprawl made them slow and not as tall. There is evidence from classical authors of ceratopsians living alongside men in ancient times. But tantalizing reports from Africa also suggest that these creatures persist even to the present!