Dragons mentioned in the Bible 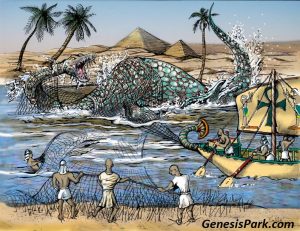 The word “dragon” appears numerous times in the King James Version of the Old Testament. The Psalmist jubilantly declared, “Praise the LORD from the earth, you dragons, and all deeps:” (Psalm 148:7). Remember that the Bible was originally translated into English long before the word “dinosaur” was coined (back when scientists called the great reptiles “dragons”). So might these references to a dragon actually be dinosaurs known in the Bible times? Here’s another Psalm reference: “You shall tread upon the lion and adder: the young lion and the dragon shall you trample under feet” (Psalm 91:13). Stepping in triumph upon a foe that was just vanquished is a tradition that is thousands of years old (Joshua 10:24). The association with snakes and lions indicates that the dragon is a real creature that it would be impressive to step on! Jeremiah 51:34 states, “he has swallowed me up like a dragon…” which brings to mind the way many carnivorous reptiles gulp their prey whole. Dragons of the sea are mentioned in the ancient book of Job (7:12). The use of the same Hebrew word, “tannin,” to describe both land creatures and marine animals indicates that it cannot simply be alluding to one specific type of animal, like a crocodile (which is what “tannin” means in modern Hebrew) or a snake. Rather it seems to describe a category of monsters, especially large reptiles. It might very well reference dinosaurs or plesiosaurs known to still be alive just thousands of years ago. 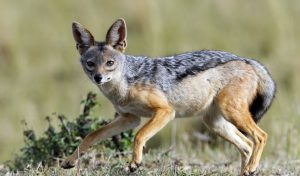 Some scholars have suggested that the “tannin” is merely a jackal. Liberal theologians, who are dubious about having dragons (which they believed to be mythical) in the Bible, prefer the jackal interpretation. The Hebrew word for jackal is “tan” and the plural is “tanim.” So there is a similarity in the two words. But the misguided effort to equate the two words falls apart when it comes to translating “tannin of the sea” (Psalm 74:13-14). There are no jackals of the sea! Indeed, the phrase with tannin in Genesis 1:21 seems to be best translated: “And God created great sea monsters…” One such sea monster became sufficiently well-known to the ancients to be given the special name “Rahab” (Isaiah 51:9). Likely whales were also considered sea monsters by these Hebrews because Lamentations 4:3 describes tannin who breast feed their young.

The prophet Ezekiel likened Pharaoh to a sea monster that invaded the Nile river and stirred up the mud as it swam (32:2). The Egyptians used nets to fish the Nile (and still do today). In 32:3, Ezekiel talks about netting a dragon and subsequently hauling it up onto the land. Ezekiel 29:3 refers to inserting hooks into the dragon’s jaws to draw it into the open field where the carnivorous animals would feed on its carcass. The picture is a vivid one that might recall an actual historical event that happened in ancient Egypt. The Hebrew word “tannin” is from the root meaning “to extend.” The language conjures up an image of a long-necked marine creature paddling up the river and stirring up the sediments of the Nile delta with its flippers. Just such a creature is depicted in ancient Egyptian art. So perhaps Nile fisherman actually captured and killed a sea dragon like Ezekiel describes (see image upper right). We know that the passage cannot reference a whale or other marine mammal because it is described as having scales (29:4). 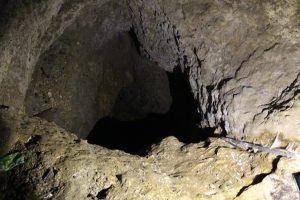 The Jewish leader Nehemiah came back from Babylon to visit the ruined city of Jerusalem and noted in chapter 2:13 “And I went out by night by the gate of the valley, even before the dragon well, and to the dung port, and viewed the walls of Jerusalem, which were broken down, and the gates thereof were consumed with fire.” What is this “Dragon Well”? Perhaps the debris near that well had become the den of a large reptile who had moved in. After killing or chasing off the dragon, the people could again use the well and it was thereafter remembered as the “Dragon Well.” Tradition informs us that this well is Warren’s Shaft, pictured to the right.