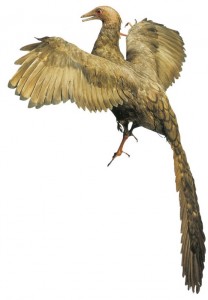 The “feathered dinosaurs” continue to make science headlines. While there is nothing in the historical creation model that is at odds with some dinosaurs having feathers, the hype that has been generated around this leaves even some evolutionists like Storrs L. Olson, Curator of Birds at the Smithsonian Institution disgusted by the unwarranted speculation. In 1999, National Geographic was forced to admit that their much-touted Archaeoraptor fossil was a fraud. Independent studies by embryonic researchers and respiratory experts reported in the journal Science that dinosaurs evolving to birds is just not a reasonable scenario (Creation Ex Nihilo 20:41, 1998).

Archaeopteryx is considered by many evolutionists to be an ancestral form linking reptiles and birds. While Archy certainly is a unique creature, its fully-formed feathers, wish bone, and perching feet clearly establish that it was a bird. Evolutionists point to it having a tail and claws on its wing. But some birds that are alive today exhibit these features. It is best described as a mosaic creature (like a platypus) that has some special features, like teeth. Some Darwinists have even suggested that the small carnivorous dinosaur Compsognathus could be the transitional dinosaur between Archy and the reptiles. Although the Compy appeared to have hollow bones, it makes a poor specimen for the evolutionists speculation because it co-existed with Archaeopteryx. Other evolutionists point to the elongated hands of the dinosaur Deinonychus and claim that it may have been the predecessor to Archy. But it is thought to have lived millions of years after Archaeopteryx! Moreover, dinosaurs are divided into two formal groups: lizard-hips and bird-hips. Modern evolutionists claim that it is these lizard-hipped dinosaurs that evolved into birds, which appears to be rather contradictory. Recently some Darwinians suggested the story be altered, placing the ornithischia  (bird-hipped) closer to actual birds than the large sauropods. (Baron, Matthew, et al: “A New Hypothesis of Dinosaur Relationships and Early Dinosaur Evolution,” Nature, 2017.)

For many years, fossil birds found in the lower Cretaceous seemed to be built for climbing and gliding, rather than powered flight. This allowed evolutionists to speculate that modern-looking birds evolved over 40 million years during the Cretaceous. However, a 2017 paper reported a fully flying avian fossil from the Lower Cretaceous Jiufotang Formation in Liaoning Province, China (Wang, Li, et al., “Insight into the Growth Pattern and Bone Fusion of Basal Birds from an Early Cretaceous Enantiornithine Bird,” Proceedings of the National Academy of Sciences, 2017, pp. 11470-11475.) This find essentially shattered the  window of time for bird evolution.

In June of 2009 researchers at Oregon State University made a fundamental new discovery about how birds have a lung capacity that allows for flight. This finding convinced even the evolutionary researchers that it was unlikely that birds descended from any known theropod dinosaurs. “It’s really kind of amazing that after centuries of studying birds and flight we still didn’t understand a basic aspect of bird biology,” said John Ruben, an OSU professor of zoology. “This discovery probably means that birds evolved on a parallel path alongside dinosaurs, starting that process before most dinosaur species even existed.” (Quick, Devon, Ruben, John, “Cardio-pulmonary Anatomy in Theropod Dinosaurs: Implications from Extant Archosaurs,” Journal of Morphology, Vol. 270:10, May 20, 2009, pp. 1232 – 1246.)

There is a distinct possibility that some of the truly feathered specimens found in the Mesozoic layers are, in fact, flightless birds. But because there aren’t supposed to be fully-developed birds like an ostrich around at that time, they are instead labeled “feathered dinosaurs.” Consider that the modern ostrich has solid bones and lacks some of the typical skeletal features of birds. Another possibility is that some of these finds do not really display feathers at all, but decaying reptilian scales. An analysis of the Chinese fossil Sinosauropteryx indicates that “protofeathers” were decaying collagen fibers. In fact, the article goes on to show similar “protofeathers” discovered on an ichthyosaur, an extinct dolphin-like swimming creature! (Lingham-Soliar, Feduccia, and Wang, “A New Chinese Specimen Indicates that ‘Protofeathers’ in the Early Cretaceous Theropod Dinosaur Sinosauropteryx are degraded Collagen Fibres,” Proceedings of the Royal Society, August, 2007, p. 274.)

The prevailing paradigm of dinosaurs in the Mesozoic and birds evolving thereafter has become a “reinforcement syndrome” that results in circular reasoning. Fossilized tracks that might be problematic are interpreted in such a way as to reinforce the paradigm. Discussing the Chuckanut Formation (which is dated to after the supposed dinosaur extinction), evolutionists write, “The most spectacular trace fossils are numerous large tridactyl footprints. In rocks of Mesozoic age, tracks of this size and shape would likely be interpreted as having been made by a small dinosaur, but during the Cenozoic Era, the track maker could only have been a giant ground-dwelling bird….” (Mustoe, Tucker, and Kemplin, “Giant Eocene Bird Footprints from Northwest Washington, USA,” Paleontology 566:1293-1305, 2012.)

Most people are surprised to learn that many modern bird species have been discovered buried with dinosaur remains: “parrots, owls, penguins, ducks, loons, albatross, cormorants, sandpipers, avocets, etc.” (Batten, Don, “Living Fossils: a Powerful Argument for Creation,” Creation 33 (2), 2011.) “This symphysis appears to represent the oldest known parrot and is, to my knowledge, the first known fossil of a ‘terrestrial’ modern bird group from the Cretaceous. The existence of this fossil supports the hypothesis, based on molecular divergence data that most or all of the major modern bird groups were present in the Cretaceous.” (Stidham, Thomas A., Nature 396, 29-30, November 5, 1998.) 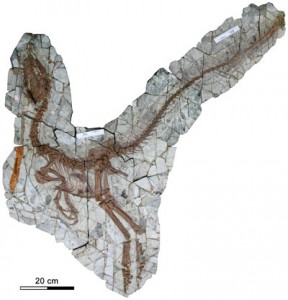 In 2012 researchers published the story of an amazingly well-preserved Chinese fossil. (Xing, Bell, et al., “Abdominal Contents from Two Large Early Cretaceous Compsognathids (Dinosauria: Theropoda) Demonstate Feeding on Confuciusornithids and Dromaeosaurids,” PLoS ONE 7(8), 2012.) The clarity of the small theropod dinosaur Sinocalliopteryx gigas allowed the researchers to be able to make out its intact stomach contents! Three birds that were partially digested were so plainly visible that the researchers were even able to make out the species of the bird: Confuciusornis sanctus. The fact that dinosaurs were munching down fully-formed, beaked birds that were capable of powered flight indicates that they were very lithe and agile hunters. It also indicates that birds did not evolve as the descendants of these same dinosaurs!  While this isn’t the first bird discovered in a dinosaur’s gut, it is the best preserved to date. 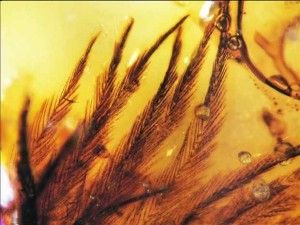 Between 2004 and 2014 a number of papers by George Poinar were published, documenting his work with ancient Burmese amber. These extensive amber fossils were found near a coal deposit and are dated by evolutionists at 100 million years old. But the fossilized resins contain remains of modern-looking birds, reptiles, fish, clams, plants, and mammals in strata near or below dinosaur fossils. Among a spectacular array of modern insects, the amber preserved fully formed flight feathers, and even hairs!

Most problematic of all for the dinosaur-to-bird story are the birds that have been found in rocks dated to the Triassic, a time in the fossil record that evolutionists believe preceded most dinosaurs. “Fossil remains claimed to be of two crow-sized birds 75 million years older than Archaeopteryx have been found….a paleontologist at Texas Tech University, who found the fossils, says they have advanced avian features. …tends to confirm what many paleontologists have long suspected, that Archaeopteryx is not on the direct line to modern birds.” (Nature, vol. 322, 1986, p. 677.) The discoverer, Sankar Chatterjee of Texas Tech University, named the find Protoavis texensis (“first bird from Texas”). He reported that the skull of Protoavis has 23 features that are fundamentally bird-like, more bird-like than the more recent Archaeopteryx. Dr. Alan Feduccia of the University of N.C. and the author of the encyclopedic The Origin and Evolution of Birds (1999) studied ostrich embryos and concluded: “Whatever the ancestor of birds was, it must have had five fingers, not the three-fingered hand of theropod dinosaurs.” (Naturwissenschaften 89:391-393, 2002) In a more recent work (Riddle of the Feathered Dragons, Yale University Press, 2012.) Fedducia provides a thorough analysis of the Mesozoic avian fossils from China, then exposes the massive, unfounded speculation that has accompanied these discoveries and been published in the pages of prestigious scientific journals. He argues that advocates of the current orthodoxy on bird origins have ignored contrary data, misinterpreted fossils, and used faulty reasoning.

Tracks from a flying reptile, a duck-billed dinosaur, and birds have been found in Denali National Park, in central Alaska. This included two previously unknown bird species as well as a number of familiar ones. (See Fiorillo, et. al., “A Pterosaur Manus Track from Denali National Park,” Palaios 24, 2009, pp. 466-472.) Four species of birds are represented amongst dinosaur tracks in eastern Wyoming. (Lockley, Nadon, and Currie, “A Diverse Dinosaur-bird Footprint Assemblage from the Lance Formation, Upper Cretaceous, Eastern Wyoming,” Ichnos 11:, 2003, pp. 229-249.) A large number of tracks that are identical to modern shorebirds have been found alongside both dinosaur and pterosaur tracks in eastern Asia. (Zhang, et. al., “Diverse Dinosaur-, Pterosaur-, and Bird-track Assemblages from the Hakou Formation, Lower Cretaceous of Gansu Province,” Cretaceous Research 27, 2006, pp. 44-45.) A supposed 105 million year old flying bird’s fossilized track has been found at Dinosaur Cove in Victoria, Australia alongside tracks of a theropod dinosaur, like those that were supposed to be the ancestors of the birds! (Martin, Vickers-Rich, “Oldest Known Avian Footprints from Australia,” Palaeontology, October, 2013.)

Famous geologist William Logan in the 1800s discovered what looked like fossilized bird tracks on Blue Beach at Horton Bluff in Nova Scotia, Canada. This rock layer containing the tracks is dated by evolutionists to the Carboniferous (300-360 mya). The Canadian Paleontologist Charles Sternberg, revisiting these tracks in 1933, said that they “superficially … resemble the tracks of some of the wading birds, but of course there is little probability of their having been made by birds.” (Sternberg, Charles M., “Carboniferous Tracks from Nova Scotia,” Geological Society of America Bulletin 44:951-964, 1933.) If these trace fossils were found in recent sediments, Sternberg would almost certainly have identified these as bird tracks. 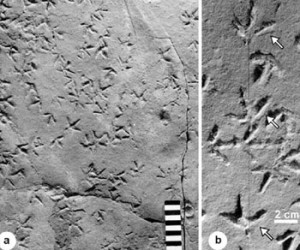 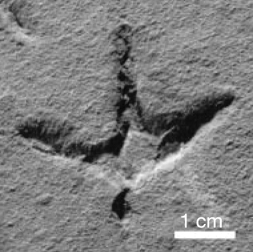 But probably the most fascinating site in this regard is from northwestern Argentina. There are fossilized bird tracks found in late Triassic sediments, when evolutionists believe that only the very earliest dinosaurs were supposed to exist (a supposed 55 million years before Archaeopteryx came along). (Melchor, R.N. et. al, “Bird-like Fossil Footprints from the Late Triassic,” Nature 417, 2002, p. 936.) The tracks are so clearly birdlike and problematic that the authors have more recently attempted to re-date these sedimentary layers as a way of escaping the thorny issue. (Melchor, R.N., et. al., “A Late Eocene Date of Late Triassic Bird Tracks,” Nature 495:E1-E2, 2013.)  The existence of numerous well-preserved bird remains directly alongside the oldest dinosaur tracks should effectively end the speculation that birds evolved from dinosaurs!