Interesting Items in the News 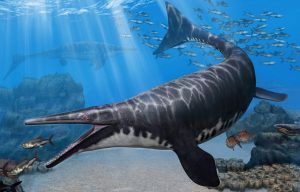 2020 was a productive year for discovering new types of dinosaurian monsters. A new variety of the giant marine lizard Mosasaurus was discovered by a Canadian team in a phosphate mine in Morocco. The new species in distinct in that it has a narrow, crocodile-like mouth.

In August of 2020 the Zoological Journal of the Linnean Society of London published a paper on the first complete dinosaur skeleton ever discovered. This Ankylosaurs was so heavily armored, from its bony club-like tails to its spiked neck and back side that it has been called the “tank dinosaur.” Author David Norman notes that the dinosaur was unearthed in 1858 in Dorset, England. Richard Owen, famous for inventing the word dinosaur, inadequately described it. Hence the recent paper. This small-brained, plant-eating dinosaur was about 13 feet in length and covered in spiky, bony armor. Its face was plastered in horny dragon-like protrusions. It was a fairly agile animal that used its defensive spines to deter predators.

It has also been a fruitful year for pterosaur discoveries. Recently a discovery in the UK was given the name Wightia declivirostris, or “slanting beak.” It belongs to a bizarre group of smallish pterosaurs that had elaborate soft tissue crests (the ornamentation atop the head like the comb of a rooster). This flying reptile featured a sweeping crest that was probably bright in color and used in sexual displays.

Recently Added to the Park

We have added a page on Marine Organisms in Dinosaurs Fossil Layers. These ocean-dwelling organisms are clear evidence for a catastrophic Flood like the Bible discusses in Genesis.

The Genesis Park Store has been streamlined and the turn around time for orders has been reduced. We are now processing credit cards and shipping directly from an off-site warehouse.

Genesis Park sends out a brief monthly newsletter which pushes our latest news and pertinent creation information to your email. Genesis Park will never share your email (and you can easily unsubscribe). Follow the link to sign up for the Genesis Park Monthly Newsletter!

Our Upcoming Expeditions page has been updated to reflect the initiatives planned for the next few years. We are optimistic of an exciting discovery in the near future! The DinoDave website features Dave Woetzel’s speaking schedule and an overview of “The Creation Investigation.”

A couple of recent comments from visitors to Genesis Park:

Thank you for visiting the park. Please consider dropping us a note with your thoughts before you leave.