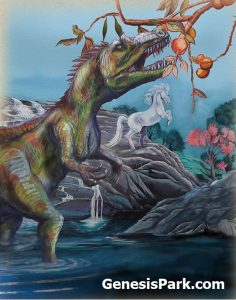 Fictional narratives and action movies abound with speculation about what it was like to live on the primeval earth. It is a natural thing about which to be curious, especially when we discover tantalizing clues of strange ecosystems and fascinating creatures buried in the crust of the earth. What caused the environment to be so different in the distant past? The first book of the Bible gives us some hints as to how the great Age of Reptiles came into being. After God’s work of creation, He commanded animals to “Be fruitful and multiply” (Genesis 1:28). Because of their reproductive capacity and the conditions of the Early Earth before the great Flood, reptiles became especially numerous. Certain scientific experiments seem to fit in well with this picture of Genesis. However, modeling a pre-Flood environment is an active area of research, one in which Genesis Park seeks to participate.